The Mikoyan-Gurevich MiG-8 Utka (Russian: "duck") was a Soviet experimental aircraft. Built of wood, the aircraft was designed and built in 1945 to test the novel canard configuration. It also used a tricycle undercarriage, the first used by the OKB. It was modified to test a variety of vertical stabilizer and wingtip configurations and was later used as a liaison aircraft for many years by the design bureau.

Nicknamed Utka ("duck"), as the word canard (referring to its small forward wing) is French for "duck", and the Russian term for canard wing is "duck" scheme (схема "утка"), the MiG-8 was an experimental aircraft designed and built by the OKB to evaluate the stability and handling of the canard configuration in conjunction with swept wings. This design has benefits in a jet-powered aircraft as it leaves the rear of the fuselage clear of interference from the jet's exhausts. To test the concept the MiG-8 was powered by a Shvetsov M-11 five-cylinder radial engine, with a pusher propeller.

The aircraft was used as a testbed for developing the swept wing of the MiG-15 and afterward continued to fly as a communications/utility aircraft for the OKB. Being made of wood and fabric, it was very light and reportedly a favorite among MiG OKB test pilots for its docile, slow-speed handling characteristics.

Vertical stabilizer. (It's critical to make both stabilizer lined-up.) 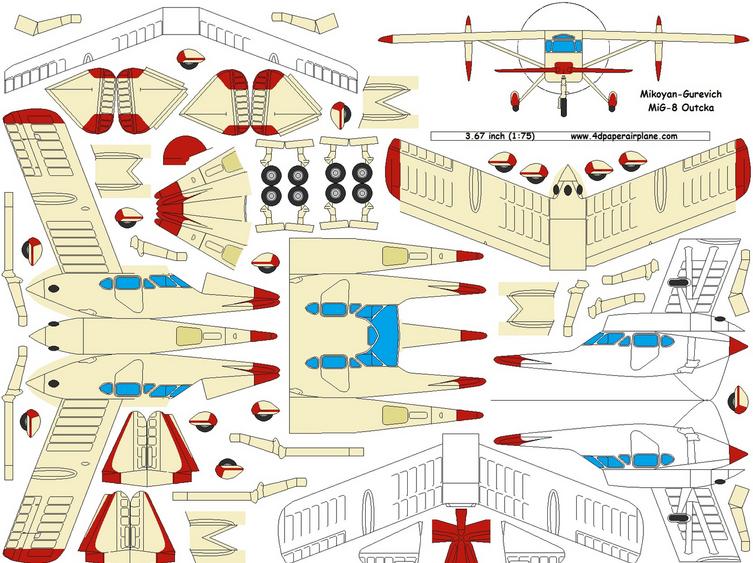