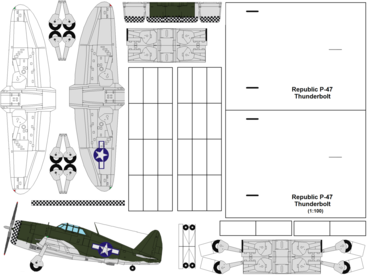 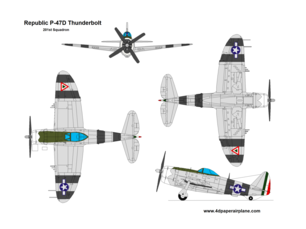 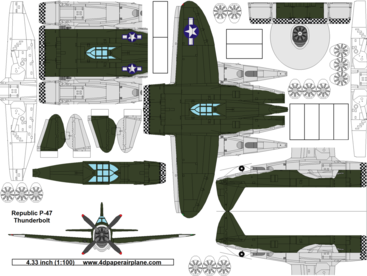 The Forgotten Eagles - The 201 Squadron - In English.

The P-47 main wing has a dihedral angle, critical for stable fly. Use the wood-caste helped to shape the main wing.

When constructing the main fuselage, the one part with the top part of the main wing, attach wing with bottom part first. When glue aft-fuselage to the tail wing, make sure keeping tail-wing straight, to avoid "fish-tailing" in flys . 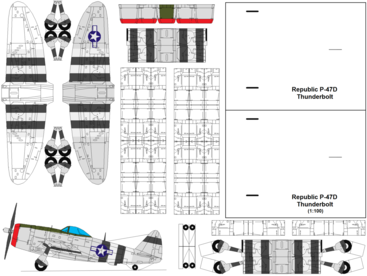 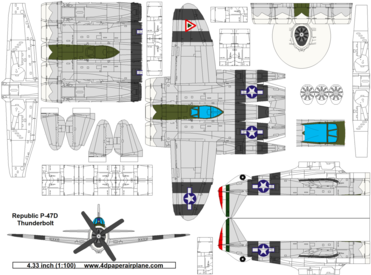 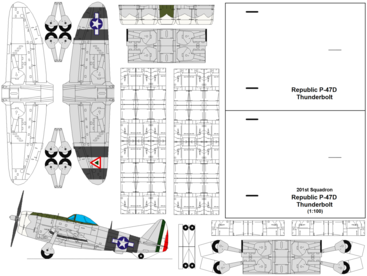 The 201st Fighter Squadron (Spanish: Escuadrón Aéreo de Pelea 201) was a Mexican fighter squadron, part of the Mexican Expeditionary Air Force that aided the Allied war effort during World War II. The squadron was known by the nickname Águilas Aztecas or "Aztec Eagles", apparently coined by members of the squadron during training.

The squadron was attached to the 58th Fighter Group of the United States Army Air Forces (USAAF) during the liberation of the main Philippine island of Luzon in the summer of 1945. The pilots flew Republic P-47D-30-RA Thunderbolt single-seat fighter aircraft carrying out tactical air support missions.

The Mexico City Metro Line 8 station Metro Escuadrón 201 is named after the squadron, whilst it was also the subject of the Mexican film Escuadrón 201, directed by Jaime Salvador and released in 1945. On November 22, 2004, the squadron was awarded the Philippine Legion of Honor, with a rank of Legionnaire, by then president Gloria Macapagal-Arroyo. The unit is still active at present, flying the Pilatus PC-7. 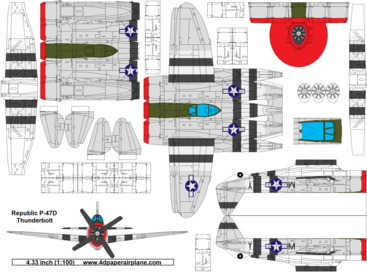 The Republic P-47 Thunderbolt was a World War II-era fighter aircraft produced by the United States from 1941 through 1945. Its primary armament was eight .50-caliber machine guns and in the fighter-bomber ground-attack role, it could carry five-inch rockets or a bomb load of 2,500 pounds (1,103 kg). When fully loaded the P-47 weighed up to eight tons making it one of the heaviest fighters of the war. The P-47 was designed around the powerful Pratt & Whitney R-2800 Double Wasp engine which was also used by two U.S. Navy/U.S. Marine Corps fighters, the Grumman F6F Hellcat and the Vought F4U Corsair. The Thunderbolt was effective as a short-to-medium range escort fighter in high-altitude air-to-air combat and ground attack in both the World War II European and Pacific theaters.

The P-47 was one of the main United States Army Air Forces (USAAF) fighters of World War II, and served with Allied air forces including France, Britain, and Russia. Mexican and Brazilian squadrons fighting alongside the U.S. also flew the P-47.

The armored cockpit was relatively roomy and comfortable and the bubble canopy introduced on the P-47D offered good visibility. A present-day U.S. ground-attack aircraft, the Fairchild Republic A-10 Thunderbolt II, takes its name from the P-47.