In the late fiftieth and early Sixtieth, jet engine has become available to made airplane into supersonic. New fighters and bombers with supersonic speed kept roll out. It’s all nature of thinking commercial supersonic transporter (SST) in the future travel, the potential new market switch for airline industry. Therefore, producing supersonic transporter airplane would be as next frontier. Just as the sputnik sparked competition in the cold war era, SST becomes a symbol for advanced aviation industry and the developing of first SST immediately become a price for cold war competition.

Through an Anglo-French treaty, the joint venture from Aérospatiale and the British Aircraft Corporation (BAC) leads the development of Concorde SST. At same time aerospace company Tupolev from Soviet Union also announced development of SST designated as Tu-144. As the competition started, US also stepped into SST development from partially government founded program. Boeing proposed Boeing 2707 SST and Lockheed proposed L-2000 SST. But due to environment concern and cost-effect issue, American halted the development of SST at stage of mocked prototypes.

Meanwhile, the competition between team Concorde and team Tu144 was going on and getting fierce with sometimes the accusation of technology spying on SST project; accidentally the Concorde and Tu-144 do have some strong resemblance. After years of development, Tu-144 had its first fly on December 31, 1968, two months ahead of Concorde. Bur the competition was not stopped after. At 1973 Paris Air show in which both Concorde and Tu-144 was on exhibition, the air show become a typical cold-war show down that end up a fatal accident. The SST of Tu-144 crashed during its flying demonstration. That caused death of all 6 crew member of Tu-144 and 8 French civilians on the ground. Since it’s a live show, the tragic crash of Tu-144 was on filme. The crash is really an apex of the cold war in the form of SST competition. The peculiar cause of the crash was investigated by both French and Soviet Union without a clear conclusion at time. However, the real events that lead to the crash were finally revealed after end of cold war. It’s a typical cold war collision. Nevertheless, the crash leads to the end of Tu-144 program. Concorde eventually becomes longest serving supersonic airliner and a solely SST for the most of its service.

However, in the years followed, only 20 of Concorde were ever produced and flied by mainly British Airway and Air France. Both airlines had hard time to make the fleet profitable. The SST commercial market did not materialize as many predicted. At same time, when French, British and Soviet Union concentrate their effort on SST, Boeing unveiled Boeing 747, aka the Junbo Jet. It’s the first wild-body high-subsonis jet that can carry up to 600 passengers. From 1968, Boeing has built more than 1500 of Jumbo Jet, that is well exceeded critic’s expectation. Comparing to 20 Concordes produced, Boeing 747 has dominated airline market for decades and was simplify know as Jumbo Jet that is still in service now.

In the end, Concorde successfully build SST, but Jumbo Jet wins its market. 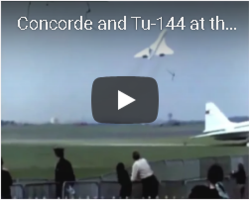 In the air show, pilots of Tu-144 took dramatic actions to avoid the collision, a reasonable move for MiG 21-ii, a much smaller fly-training plane to piloting Tu-144. That move was too much for Tu-144 and directly led to the disaster.