Vought F-8E Crusader (The last of the gunfighters) 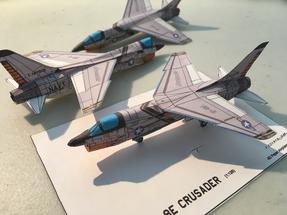 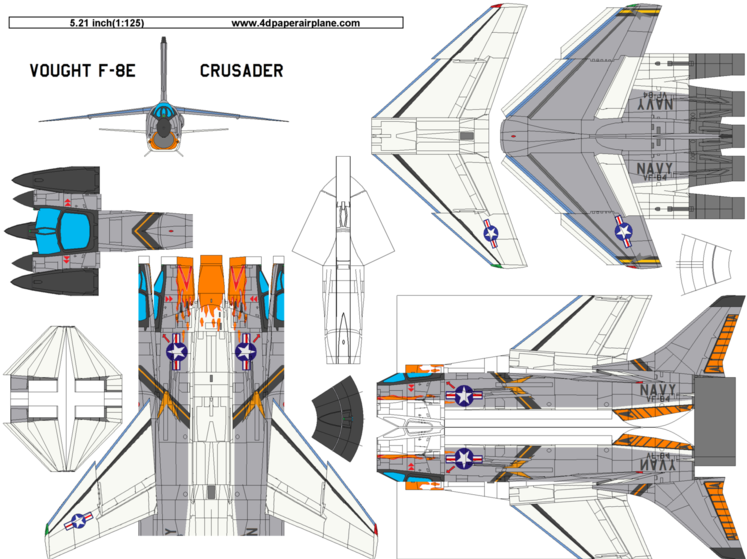 The tail part is on unique design, make sure the tail-wing lined up well. When glue top (wing and the aft fuselage piece, make sure leave a pocket for holding the forward fuselage.

It's The weight-adjust is recommended although it's worked well to fly for me (this also depend on how much you will slide in of the front fuselage). Make sure use light-weight paper to print out.

Like its real counterpart, 4D model of Vought F-8E is not easy to fly. The anhedral wing (a downward-angle wing) make its agile but hard to have a stable fly. Reduce the anhedral angle helped its stability 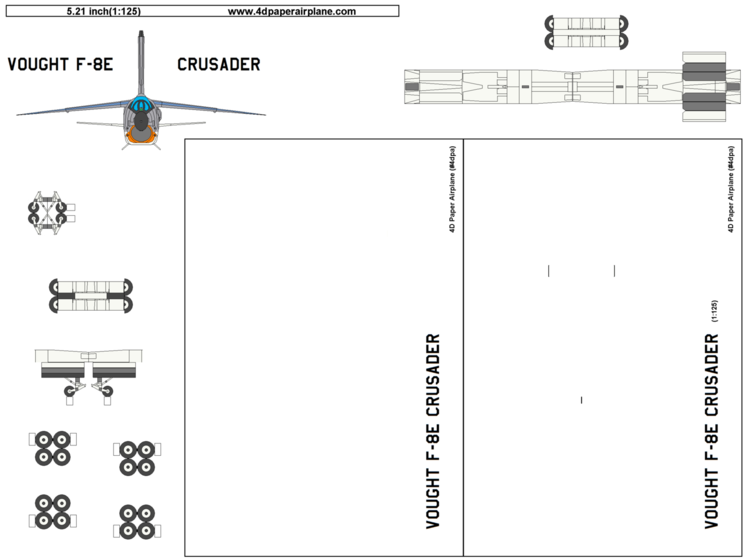 The Vought F-8 Crusader (originally F8U) is a single-engine, supersonic, carrier-based air superiority jet aircraft built by Vought for the United States Navy and Marine Corps (replacing the Vought F7U Cutlass), and for the French Navy. The first F-8 prototype was ready for flight in February 1955. The F-8 served principally in the Vietnam War. The Crusader was the last American fighter with guns as the primary weapon, earning it the title "The Last of the Gunfighters".

The most innovative aspect of the design was the variable-incidence wing which pivoted by 7° out of the fuselage on takeoff and landing (not to be confused with variable-sweep wing). This allowed a greater angle of attack, increasing lift without compromising forward visibility. This innovation helped the F-8's development team win the Collier Trophy in 1956.

The Crusader was not an easy aircraft to fly and was often unforgiving in carrier landings.

The unarmed RF-8A proved good at getting low-altitude detailed photographs, leading to carrier deployments as detachments from the Navy's VFP-62 and VFP-63 squadrons and the Marines' VMCJ-2. Beginning on 23 October 1962 during the Cuban Missile Crisis, RF-8As flew extremely hazardous low-level photo reconnaissance missions over Cuba, the F-8's first true operational flights. Two-ship flights of RF-8As left Key West twice each day, to fly over Cuba at a low level, then return to Jacksonville, where the film was offloaded and developed, to be rushed north to the Pentagon.